I am currently based in Beirut, where I work as a writer and political analyst. I am currently working for the Centre for Humanitarian Dialogue, a Geneva-based private diplomacy organization; in addition to that, I continue to write occaisional articles and analytical pieces. Between 2011 and 2014 I was a journalist based in Sanaa and reporting for McClatchy, the Christian Science Monitor and the Economist. As you can probably guess I would have never done anything I had done had I not majored in Arabic at Williams; in a lot of ways it paved the way for my future career. 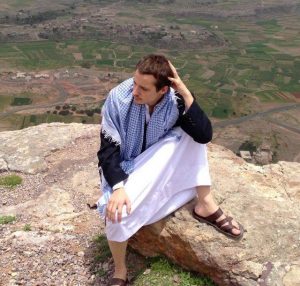 I took my first Arabic class on a complete whim, but it has led me to many rewarding experiences. The summer between my Junior and Senior year, I received a travel fellowship, which I used to go from Cairo to Istanbul, crossing through Jordan, Syria and Lebanon. Both in terms of self discovery and intellectual discovery, it was invaluable and, from wandering the streets of old Damascus to the hopping the bars of Beirut to putzing around various ancient monuments in Jordan and Egypt to just sitting back and soaking in the historical and cultural richness–and political complexity–of what was around me, I was completely hooked. There was this awesome feeling of newness, of discovery, of vulnerability–not a matter of traveling alone, but of rewriting my conceptions of the world around me on an almost daily basis. It was incredible, and I’ve been chasing after that feeling since.

If I were to develop a bucket list for current Arabic Studies majors, I would say;

Check out the various careers our alumni have pursued after Williams!
→ END_OF_DOCUMENT_TOKEN_TO_BE_REPLACED