Question: What are you doing now and where?
Chloe Brown: I’m a first-year student at Princeton’s Woodrow Wilson School of Public and International Affairs, where I’m working towards a Master in Public Affairs degree. I currently focus on residential segregation, affordable housing, and anti-poverty programs in the US. In between graduating from Williams and coming to Princeton, I spent six years in New York working in theater and arts advocacy, which was in some ways a natural extension of the work I’d done in my senior thesis on Palestinian film. I think the thing that unifies my work from those late nights in Sawyer Library (RIP) through right now has been an overarching goal of including more folks who have been historically marginalized into the holistic fabric of their communities, whether that takes the form of whose stories are being narratively represented or who is living next-door to each other. 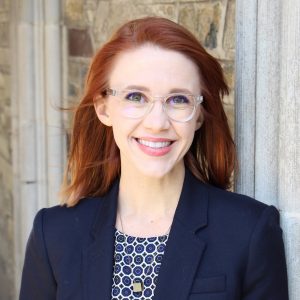 Question: How did majoring in Arabic help prepare you for what you do now?
Chloe Brown: Even though I haven’t used Arabic professionally for several years, I’d argue that my language study at Williams helped me build skills I continue to use to this day. The conversations and experiences I had access to because I was able to speak Arabic have taught me to navigate areas cultural difference more deftly whenever they occur. Because MSA is has such strict and elaborate grammar, I actually felt as though I had an easier time when teaching myself coding languages later.

Plus, you never know when your language skills will suddenly become directly relevant again. There were times during my theater career when I was able to provide translation assistance. More recently, I got the chance to travel to Israel and the West Bank with my program this winter and was surprised by how much I remembered.

Question: What piqued your interest in taking Arabic at Williams?
Chloe Brown: Honestly, the fact that it was offered. I’ve always been curious about different types of narratives and world views. I wanted to understand the Middle East better, and while I knew there were many classes I could take in English (I doubled in Religion), I believed there’s really no substitute for knowing the language itself.

Question: What was your most rewarding experience with regards to taking Arabic at Williams?
Chloe Brown: So many to choose from! My most rewarding experiences were the ones where Arabic gave me access to parts of the world I simply would not have had if I didn’t speak the language. Sometimes this was physical access – chatting with other guests at a wedding in Sana’a or visiting a town without many English speakers in the Nile Delta – but at other times, it was about who I got to build relationships with, or what pieces of literature I could experience that wouldn’t necessarily have been available in translation.

Question: If you were to develop a bucket list for the Arabic students at Williams, what would be on it?
Chloe Brown: Doing your Al-Kitaab homework is important and all, but there is really no substitute for getting out in the world. I recommend taking off your verbal training wheels as early and often as possible. Also, although many of the language programs I did were very structured, there’s really something to building in time to explore and live outside of your comfort zone. When I applied for a Gaudino Fellowship to do an independent research project in Yemen, I had never left the U.S. before. It not only helped me get out of the bad habit of translating everything in my head, but taught me to be braver and more resourceful than I was used to being at twenty.

Covid-19 is an ongoing concern in our region, including on campus. Safety measures are in place, and campus community members and guests are additionally advised to take personal precautions. See the college's Covid-19 website for information about campus policies. For the latest research and recommendations from the CDC, visit cdc.gov/coronavirus.
MENU

Check out the various careers our alumni have pursued after Williams!
→ END_OF_DOCUMENT_TOKEN_TO_BE_REPLACED