I am currently a first lieutenant in the United States Marine Corps, stationed at Camp Lejeune, North Carolina. I was deployed to Afghanistan from September 2015 to May 2016, and I am returning for another nine month deployment to Afghanistan in a few weeks. 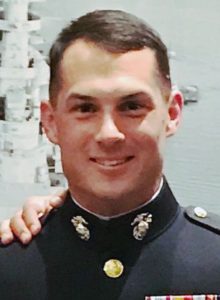 I initially majored in Arabic intending to use both Arabic language and cultural skills in my career as a Marine officer. That hasn’t worked out as planned since most of my focus has been on Afghanistan. That being said, I have benefited in particular from my study of Islam, especially for my work on Afghanistan.

My interest in the Middle East piqued during high school as I watched the Iraq war both deteriorate from 2004 to 2006 and then improve due to multiple factors, including counterinsurgency tactics from 2007 to 2009. I began reading more and more about the war, which led to an interest in the overall region. Studying Arabic was a natural way to follow my interests as well as gain a valuable skill for my intended career in the military.

My favorite class was Arabic in the Media with Professor Abeer. We studied different topics in the Arabic media over the course of the semester, so much of the class dealt with current events. I loved being able to study current events in the Middle East in Arabic, and it gave me a strong vocabulary on topics that would arise in my military career.

My bucket list: Take every opportunity to study abroad. I unfortunately had plans to study in Syria that fell through once the Arab Spring began. I was able to spend one Winter Study in Jordan and one in Lebanon, both of which were awesome experiences. I also highly recommend interacting with native Arabic speaking Williams students as much as possible. They were very helpful with some of the nuances of Arabic, especially their colloquial version. Finally, learn as much as about Middle Eastern food as possible so you can cook it whenever you want!

Check out the various careers our alumni have pursued after Williams!
→ END_OF_DOCUMENT_TOKEN_TO_BE_REPLACED